As South Africa tackles the ongoing coronavirus pandemic, Artscape Theatre has decided to proceed with the 14th edition of its popular Women’s Humanity Arts Festival, albeit as a series of live and pre-recorded online events taking place between 9 and 31 August.

Funded by the City of Cape Town, this Virtual Festival will have a full programme of dance and theatre performances, panel discussions and podcasts. Even the Women’s Humanity Walk organised by Woman Zone, which each year sees thousands of participants take to the streets from an iconic building and walking in unity to the Artscape piazza, will be a special virtual edition this year. It will take viewers on a complete tour of Cape Town’s city sites that relate particularly to women, past and present.

All the shows and performances will be accessible via the Artscape website: www.artscape.co.za

Under the theme, “Freedom and Inclusivity for All Humanity”, this year’s festival will shine a spotlight firmly on South Africa’s continuing epidemic of gender-based violence.

“Women are judged on what they wear, lambasted for defying traditional roles – both “African” and “Western”, says Artscape Chairperson, HRH Princess Celenhle Dlamini. “They are vilified for exerting their guaranteed rights, while many are subjected to violence, partner abuse, rape and femicide – all vile deeds encouraged by misogynist norms that remain deeply entrenched in society.  The ongoing Covid-19 lockdown has only exacerbated these issues, which is why Artscape will continue being a safe and protective space for Cape Town’s women, children and the LGBTQI community.”

In this light, on 9 August, female dancers from Cape Town’s renowned Jazzart Dance Theatre will perform An-Nur, which was created by dance-maker Vuyolwethu Nompetsheni, a 2018 graduate of the Jazzart three-year dance programme. According to Nompetshini, the piece reflects a mood and a movement which is resonating around the globe right now, with the dancers expressing the raw vulnerability of women everywhere, their pain to be heard and seen, and their daily struggles to be taken seriously.

From the comfort of their own homes, audiences can watch 21 Questions – Unmute, an adaptation of Trapped which was created by the Magnet Theatre Company in 2015. This work is based on the experiences of Nadine Mckenzie, who has been living with a disability since she was a toddler. Throughout her life, Nadine has been faced with questions from strangers who assume that people with disabilities are a different species to humans. 21 Questions engages with these stereotypes through documented questions posed to people living with disabilities. The work is choreographed and performed by Mckenzie under the direction of Themba Mbuli and with Siphenathi Mayekiso as a puppeteer.

Audiences will also be able to tune into a number of Woman Zone podcasts, where women writers and their stories will be celebrated. The line-up of six includes conversations with Portia Mbau and Lumai Mira De Smidt, the mother-and-daughter team behind The Africa Cookbook, Colleen Higgs, founder of Modjaji women’s publishers on My Mother, My Madness, Kelly-Eve Koopman on her book Because I Couldn’t Kill You, Philippa Kabali-Kagwa on Storytelling as a breathing space, Olivia Cotzee on Innie Shadows and Hedi Lampert on The Trouble with My Aunt. Woman Zone will also be hosting a National Woman’s Day  radio show to be broadcast on Fine Music Radio (FMR) August 10 and featuring a line-up of women involved in the Festival.

The festival will also host the inaugural Kirvan Fortuin Memorial Benefit Concert. Kirvan, a highly acclaimed choreographer, community builder and LGBTI+ activist, was stabbed to death during a personal altercation in Cape Town last month. The concert will feature an array of highly talented and renowned South African and international artists comprising dance, singing and poetry. It will be streamed on 10 August 2020 at 8 pm on the streaming site – South African Theatre on Demand (www.satod.co.za). The viewing fee is R55.

Liso the Musician will bring her individual flair to a musical style she has coined ‘Ancestral Jazz’ from 17-23 August. She joins forces with music video director and cinematographer Motion Billy to create ZAF’INGANE, a theatrical, story-driven and spiritual performance. This performance calls on South Africans to pray to God and praise the Ancestors to help the country through the pandemic and the ongoing social ills that so many of its people face. She will be accompanied by instrumentalists Ray Morgan (drums), Bradley Prince (lead guitar), Faresani Sikhwivhilu (bass guitar), and Lwazi Knowledge Masuku, Sonwabile Mhlonyane and Mendy The Musician as backing vocalists.

Award-winning stage and screen actor Tshamano Sebe, currently on Netflix in the SA horror film, 8, will make a cameo appearance in his debut musical performance.

The festival concludes with the New York City’s “Time Out” listed production #WeAreDyingHere from 24- 31 August. A poetry and music production it examines what it is like to be a woman living in South Africa today.  Produced by acclaimed theatre maker Siphokazi Jonas, #WeAreDyingHere was co-created with Hope Netshivhambe and Babalwa Makwetu. Set in ‘no-man’s-land’  in the middle of a war (the war against women), the three women have created a secret space where they debrief and process the pain of their existence, before taking up the fight again. “Time Out” informs New Yorkers of events, restaurants and online theatre performances that they could watch, among others therefore this production is not to be missed. 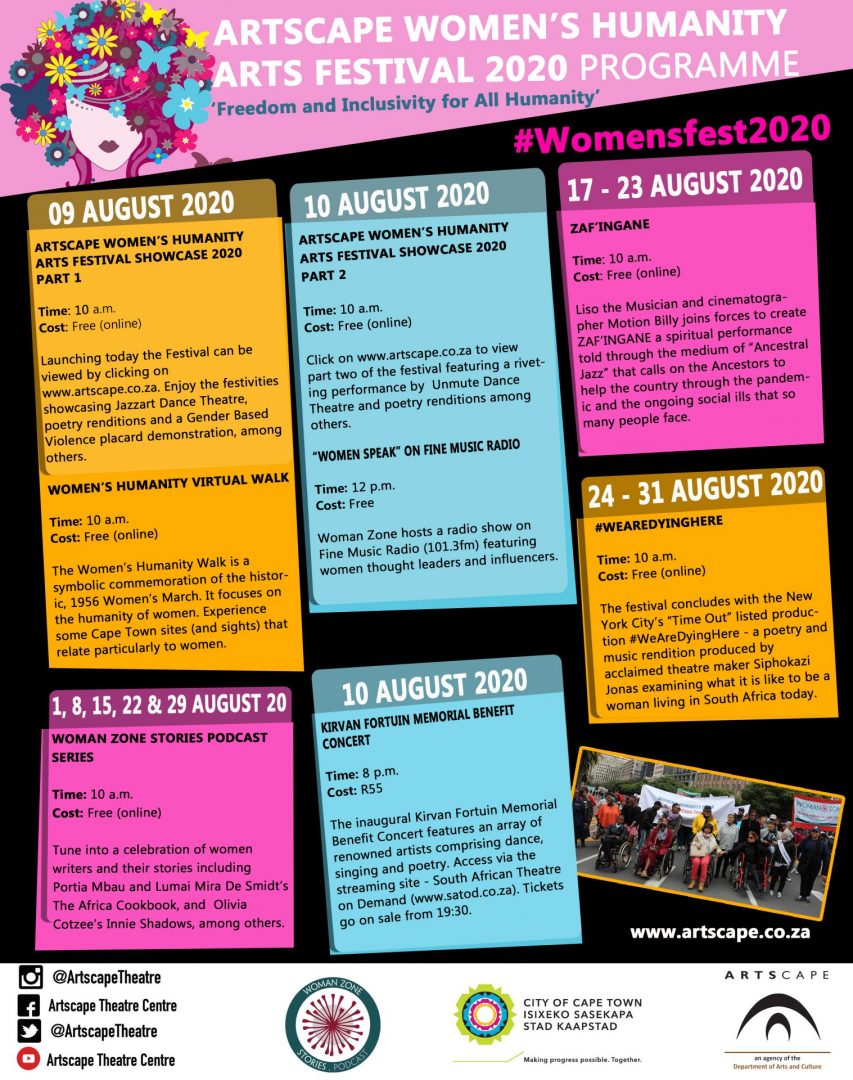