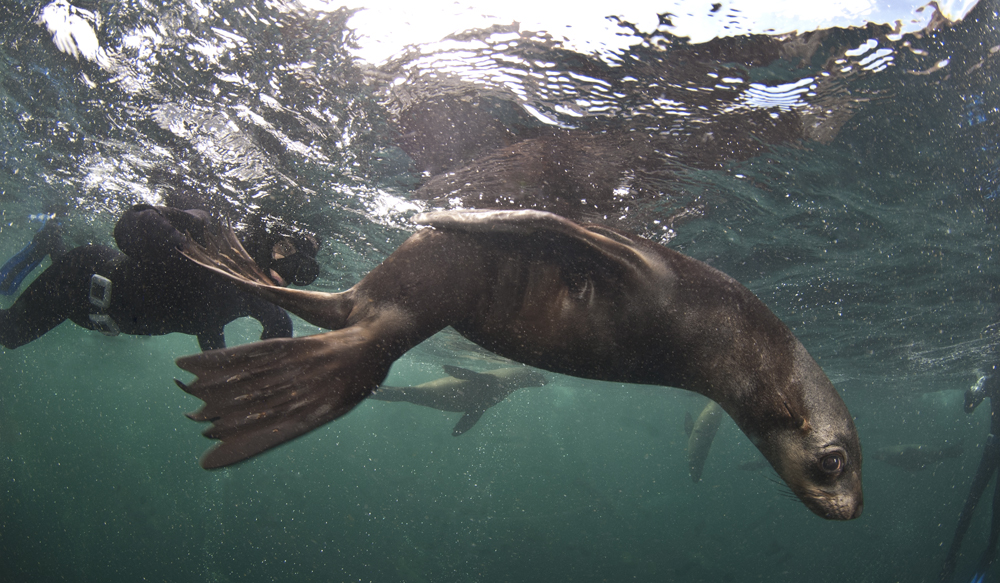 There are 35 species of seals in the world. Duiker Island is the habitat for the Cape Fur Seal. It is also a bird sanctuary, home to thousands of seals and many birds such as the Cape Cormorant, the Bank Cormorants, Black Back Gulls, Kelp Gulls and Hartlaub Gulls. It is illegal to go onto the island.

The majority of the seals on Duiker Island are young males waiting out their time until they reach the right breeding age, which is between the ages of 8 to 12 years depending on their size. Duiker Island is not a breeding colony as the sea can get very rough and the pups get swept off. The island is most densely populated from January through March due to the seals moulting. During this period they do not go off in search of food but rely on fats they have stored in their blubber. 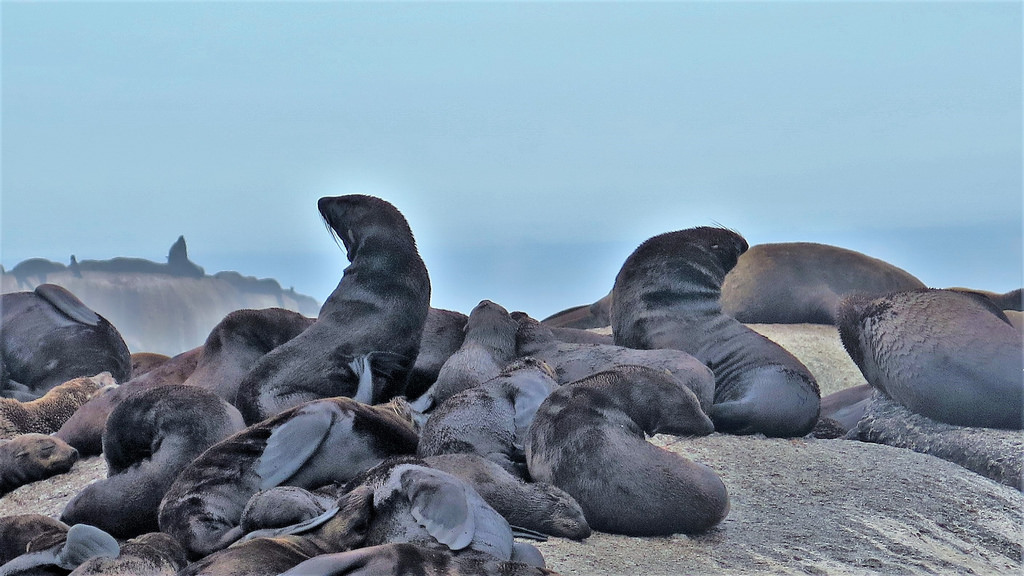 Breeding is a continuous cycle and takes place in November/December in breeding colonies around the coastline of South Africa and Namibia. After fertilization there is a dormant period of 4 months and thereafter development continues, making the active gestation period 8 months. The pups are then born in late November early December.

They grow quickly and start to swim at 6 weeks old. By about 7 months they can spend 2-3 days at sea on their own and can already swim long distances. It has been noted that tagged seals have swum from Cape Town to Cape Cross in Namibia, a distance of 1600 kms at the age of 8 months. The Cape Fur Seal dives to a depth of 36m on average but diving abilities varies between species. Their ears and nostrils close tightly when they dive, and being mammals, they cannot breathe under water. Even while sleeping in the water they have to surface to breathe, every 10-15 minutes for young ones and 30 minutes for the adults. 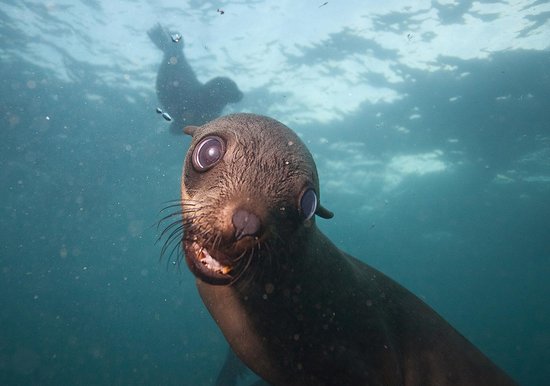 They are found as far north as the southern tip of Angola, with colonies occurring all along the coastlines of Namibia and South Africa, up to Algoa Bay near Port Elizabeth.

Population Size: According to the most recent estimations, roughly 2 million Cape fur seals reside in this range. Living in large colonies, the vast majority have settled along the pristine and wild beaches of southern Namibia as well as on islands just off the West Coast of South Africa. Since they are not nearly as agile on land as they are in the water, these secluded locations offer protection from human interference, land-based predators and habitat destruction.

Size: Once they’ve reached adulthood, males are normally much larger than females, weighing up to 350kg. Females typically weigh in at around 80kg, but can grow up to 150kg.

Mating:  Within colonies you will find that males who have reached sexual maturity will gather a harem of females. Depending on the size of the colony, these harems can be as large as 50+ females at a time.

Delayed Pups!: Females are able to delay fertilisation for up to three months, in order to ensure that they will only give birth to pups at the beginning of summer – normally late November/early December. These pups are born without blubber and are unable to swim, making them highly dependent on their mothers for nutrition and protection.

Food: While pups are suckled for the first few weeks of their lives, they eventually have to join their parents and older siblings in the hunt for food. Cape fur seals are traditionally most fond of pilchards and anchovies. However, since the numbers of these fish have been dwindling, mostly due to overfishing, seals have had to look for alternative sources of food. Fortunately they are rather opportunistic and highly adaptable, happily snacking on anything from crayfish and shrimps to seagulls and penguins.

True Seals ?: The seal family tree includes three main groups: true seals, fur seals and sea lions. There are a couple of differences between fur seals and true seals. Firstly, fur seals have cute little ears on the sides of their heads, while true seals have no external ears. Fur seals also have larger front flippers, which they use to propel themselves through the water, unlike true seals who motor along using their back flippers. There are nine species of fur seal, of which the Cape Fur Seal is most closely related to the Australian Fur Seal. 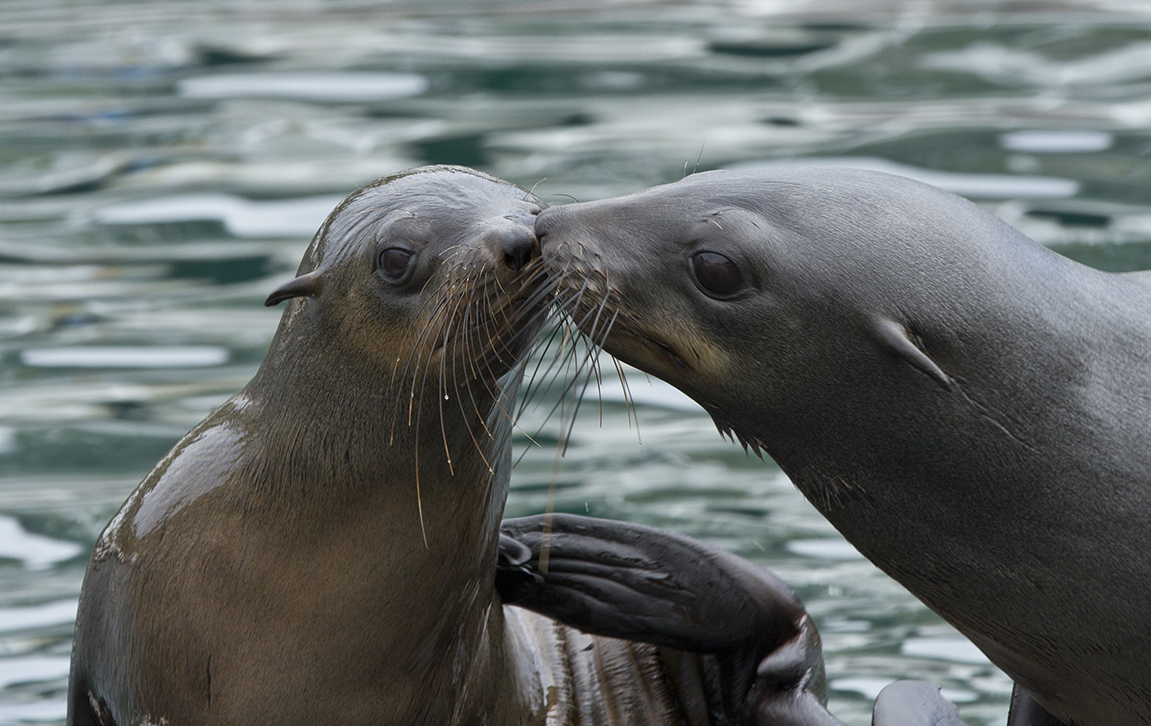 Eyesight: While Cape fur seals seem to have tiny eyes on land, they pop wide open under water, taking on something of a torch-like look. With the ability to dive to a depth of up to 200m, their intensely-developed eyes help them to see in even the murkiest conditions.

Fur Coats: Fur seals are so called, because they have two thick layers of fur – a soft inner layer and a more bristly outer layer. Along with a layer of blubber on the inside of their skins, this fur helps keep them warm in the freezing water they like to fish and play in. Sadly, this has also made them the target of much violence, as seal fur coats were a sought-after fashion item not too many decades ago. Fortunately, fur has become a huge taboo in the fashion industry and seal-hunting is now illegal in most countries. Namibia, however, is one of the culprits who has continued the killing (mostly of pups) under the guise of culling.

There are a few boat operators in the Hout Bay harbour that offers a 40 minute cruise to Duiker Island. The more adventurous ones can plunge into the cold ocean water and dive or snorkel with the seals with one of the dedicated operators.