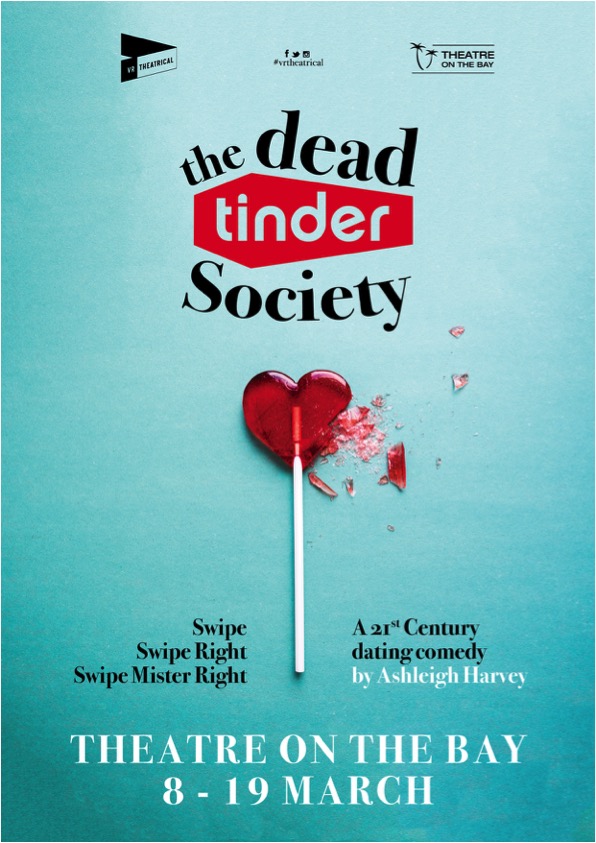 The Dead Tinder Society explores the funny, scary, vulnerable world of dating.  Not just any dating – online dating.  Specifically, Tinder.  Especially in the 21st Century when technology is at its peak, human connection is tenuous, at best, and the prospect of sex with new people is as alarming as it is tantalising.

This hilarious romp through lust, one-night stands, rage, heartbreak, desire, friendship, loyalty and re-discovering oneself after the dust has settled, tries to answer many questions: How do you resurrect your love life while mothering a baby and a toddler?  How do you forgive?  And how do you tell a famous Springbok rugby player that you won’t have sex with him on the N1?

MORE ABOUT THE CHARACTERS:

The Dead Tinder Society is a one-act two-hander play about Jodie and her friend, Ray, who are both trying to recover from broken marriages.  They have both been through loss, pain and betrayal.  During a night of drunken talk and an outpouring of emotion, they decide to get back in the proverbial dating saddle.  They join Tinder.
What follows is a journey through being single again and Jodie’s navigation through the dating world.  But the dating world of 2022 looks very different from the dating world of the 90s.  Everything is online.  Including the beast that is Tinder.  Initially, it’s an experiment to see who’s out there, if they still have what it takes, and to see if any real connections can be made via online dating apps.

Jodie, our protagonist, has to navigate the pressures of being a mom of two small children, while also trying to salvage her self-esteem.
But soon, she finds herself entangled in weed, booze, men, BDSM and realises that she is compromising who she is and what she really wants.
Several male characters weave in and out of the piece (all portrayed by Litha Bam).  Jodie narrates a lot of the play.  Her narration is punctuated by short scenes between her and her various lust/love interests.  The main relationship that is explored is the one between Jodie and Ray, but also the relationship between Jodie and her newly-divorced self.

The play is a comedy, but there are moments of extreme pathos, tenderness and pain.  Jodie represents women in their 30s who are still at the dating game, making themselves vulnerable and looking for someone with whom they can share themselves.  They are our people.

Jodie is in the grips of a messy divorce.  Now in her mid-thirties, she’s being forced to ask one simple question: In times like these, is Tinder the only place you can turn?
PRODUCTION HISTORY

This play was commissioned in 2019 by VR Theatrical as part of their initiative to develop new voices and creating a platform for aspiring new creative teams to showcase homegrown work.

Writer Ashleigh Harvey (who now resides in London, UK) and director Lesedi Job co-created the piece prior to the Covid-19 pandemic.
It had a very successful run at Pieter Toerien’s Montecasino Studio Theatre in 2019, and is now heading to Theatre On The Bay.

VR Theatrical (Pty) Ltd is a South African theatre production house.  We divide our creative work between presenting international blockbuster content such as AVENUE Q and HEDWIG AND THE ANGRY INCH, and commissioning and developing new South African works, such as TINY THE TOKOLOSHE, THE DEAD TINDER SOCIETY and HERE’S TO YOU – THE SIMON & GARFUNKEL SONGBOOK.

LESEDI JOB | DIRECTOR
Lesedi Job is an award-winning theatre director, actress and voice artist.
She completed her BA honors degree in Dramatic Arts at Wits University.  Upon graduating she was cast in the Lion and the Jewel at the Market theatre and since then has worked consistently over the years as an actress in both theatre and television playing lead roles in theatre productions such as Colored Museum, Fisher’s of Hope, Raisin in the Sun, Paradise Blue and most recently playing the character of Mantwa on The River.

In 2016 Lesedi embarked on her journey to becoming a theatre director when she was part of workshopping a new Musical in Toronto receiving mentorship from British director and previous artistic director of the Royal Shakespeare Company, Adrian Noble.
In 2017 her directorial debut was Mike Van Graan’s When Swallows Cry at the Market Theatre which won her a Naledi Theatre award for Best Director and also won awards for Best New South African Script and Best Production.  This play under her direction has gone on to be performed at the 2018 Ethiopia African Union Conference, 2018 Geneva Peace Week and 2018 Stockholm Forum on Peace and Development.

She has since directed Itsoseng, Helen of Troyeville, Dead Tinder Society, Meet me at Dawn starring Pamela Nomvete and Natasha Sutherland, Congo; the trial of King Leopold ii starring Robert Whitehead and Dr John Kani and Brutal Legacy which is an adaptation of Tracy Going’s book Brutal Legacy which confronts gender-based violence.
In 2019 Lesedi mentored director’s in Nairobi for the Kampala International Theatre Festival in Uganda as part of the Nairobi Musical Theatre Initiative in collaboration with Sundance Theatre in New York.

In 2020 she secured the rights to direct Kill Move Paradise; a play written by African American playwright James IJames in support of the Black Lives Matter movement. The play premiered this year at the Joburg Theatre. She is a recipient of the Sophie Mgcina Emerging Voice Award, Mbokodo Women in Arts Award for Theatre and was nominated as a candidate for the prestigious Rolex Mentorship Protégé Arts Initiative.

SHARON SPIEGEL-WAGNER | JODIE
Sharon is a South African actress and musician who has credits that start from children’s theatre all the way to international musicals. She also has featured on the screen both locally in television and film, as well as international series and films released in the UK, Canada and the States.
She portrayed iconic roles, such as Janet in The Rocky Horror Show and Frenchie in Grease on international stages.
Apart from working as an actress and singer, Sharon has written plays, scripts, kids theatre shows, school productions and musicals. She even wrote a children’s book about a fairy princess and a dinosaur who was her best friend. Recently, Sharon has written a play for the national Grahamstown arts festival which won a standing ovation award.
Sharon is also completing a rap slam poetry series which she will launch in 2022 and is currently assisting in writing a screenplay for a local movie.

LITHA BAM | RAY AND OTHERS
Litha Bam is a South African actor and singer.  He started performing in plays and musicals at school by age 10 and also trained as a dancer throughout his school career before working as a professional actor in TV and commercials. He has been featured in South African productions that include Home Affairs, Intersexions, 7de Laan and Scandal.
Litha has trained in New York City at both the Stella Adler Studio and New York Film Academy before working in Los Angeles.
On returning to South Africa, he performed in professional theatre for the first time, co-starring in a production of Jeff Stetson’s The Meeting at Johannesburg’s Market Theatre. He is featured in the first and second seasons of the Ridley Scott produced Raised by Wolves on HBO Max as Bartok.