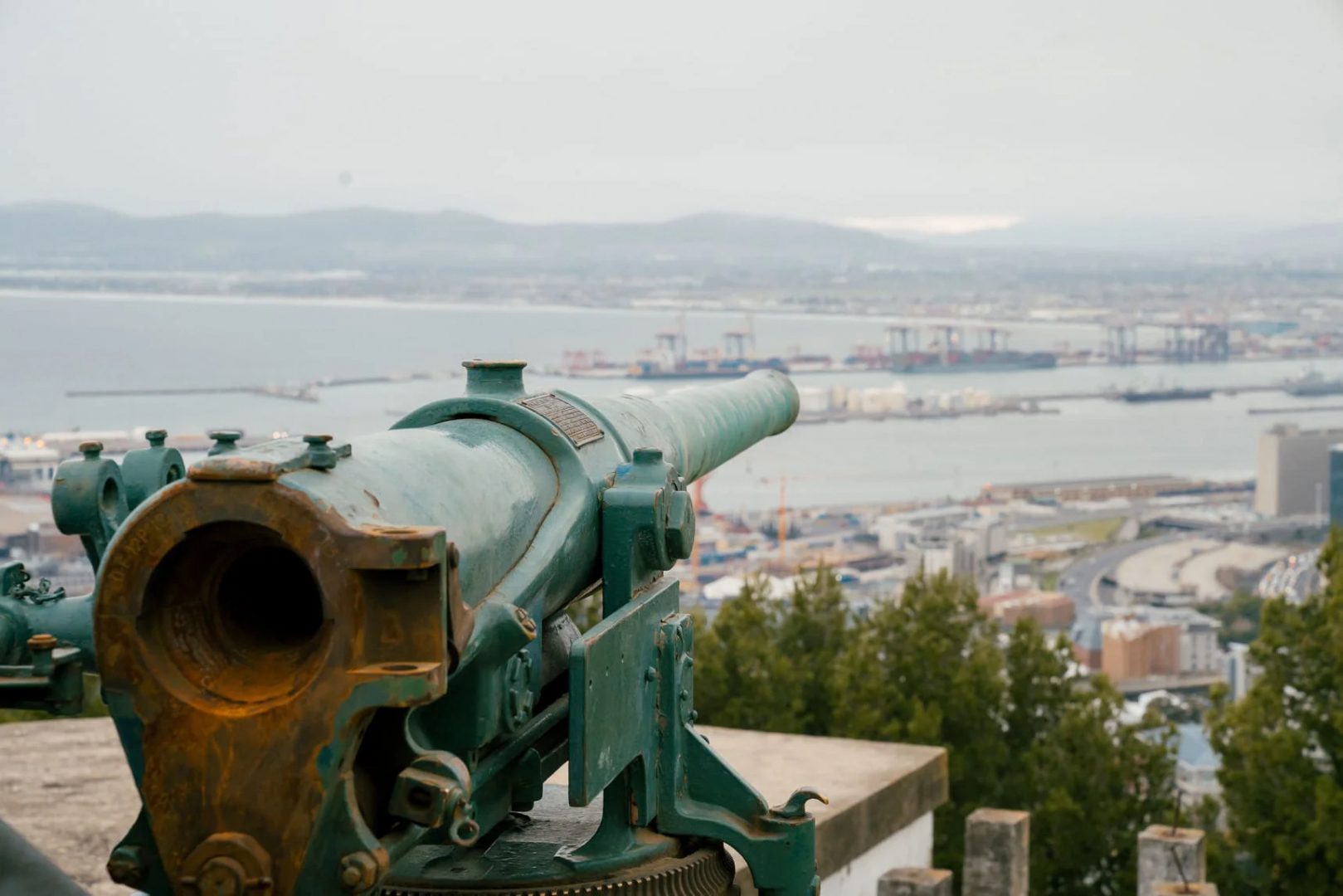 The cannon at the South African Navy’s Lion Battery on Signal Hill startles the notoriously short-memoried pigeons of the City Bowl every day at 12 Noon sharp, except Sundays and Public Holidays. Even hardened Capetonians jump in surprise from time to time when the boom echoes through the city, depending on the wind direction. People flock here every day for the firing of the Noon Gun, one of Cape Town’s oldest traditions. Public access to the area has been allowed since 1998, when the guns were moved to their present position for safety reasons

The gun was fired for the first time in 1806. It was used as a signal (hence Signal Hill) to ships in Table Bay. These are the oldest guns in daily use in the world. The noon gun has been one constant in Cape Town’s colourful and ever-changing history, with the tradition surviving colonial occupations, wars, and apartheid.

The noon gun consists of two black powder Dutch cannons that are fired alternately with one serving as a backup. The guns are 18-pounder smooth-bore muzzle loaders. They bear the monogram of King George III of England who reigned from 1760 to 1820, as well as George Rex, the founder of Knysna. Two guns are loaded daily with 1.5kg of gunpowder each (in case of a misfire – although that is extremely rare). On Friday 7 January 2005, both the Main Gun and Backup Gun failed to fire owing to a technical difficulty. This was the first time in 200 years that the Noon Gun had not fired as scheduled.

The cannoneer raises a flag and tells the story of the gun and its history. Then, at precisely noon, the gun is fired. Arrive around 11:30 daily (except Sundays and public holidays) to witness the event. You can also purchase some ear plugs: the sound is louder than you may imagine.

The Guns were originally used to announce the arrival of a ship, perhaps requiring provisions for the next leg of its journey, to residents living in the interior. The use of the guns to indicate that a ship was in port was discontinued when more modern means of communication were developed somewhat more than a hundred years ago. In addition to the aforementioned signalling duties, the guns have had the task of firing a time signal, since 1806. The cannon would allow ships to check the accuracy of their marine chronometers. Most of the ships marked their time by the puff of smoke, rather than by the sound, hence the location high above the harbour. Since 1864, the noon gun has been electrically fired from the master clock of the South African Astronomical Observatory.

The Settlement at the Cape of Good Hope was founded by the Dutch in 1652 and the signal guns were originally part of the regular artillery at the Imhoff Battery at the Castle in Cape Town. In 1795, during the Napoleonic Wars, Britain took the Cape Colony from the Dutch East India Company (Vereenigde Oostindische Compagnie (VOC) in Dutch). The VOC transferred its Territories and claims to the Batavian Republic in 1798 and ceased to exist in 1799. The British handed the Cape Colony back to the Batavian Republic in 1803. However, in 1806, the Cape was occupied again by the British after the Battle of Blaauwberg. Thereafter, the British controlled the Cape continuously until it became a part of the Independent Union of South Africa in 1910.

Shortly after the English took over, the two Dutch guns were removed from the Imhoff Battery and placed in Town as signal guns. The Castle received the latest English 18 pounders, because the very loud report of the cannons upset people nearby. The guns were eventually moved from the environs of the city itself to the somewhat more remote Lion Battery on Signal Hill. The first signal fired from there was on 4 August 1902.

One day in June 1895, the gun fired at 10.30am rather than 12 noon when a spider interfered with the relay used to remotely fire the gun. Also in the days of horse-drawn traffic, the rammer used to tramp the charge into the muzzle was inadvertently left in the bore of the cannon and when the gun fired, the rammer flew down into the city and killed a horse.

Two minutes of silence is a tradition observed world-wide when fallen soldiers are remembered. Sir Percy Fitzpatrick, the South African author of “Jock of the Bushveld”, is credited with coming up with this idea after his son, Nugent, a major in the Union Defence Force, was killed in France. Sir Harry Hands, the Mayor of Cape Town, initiated a daily noon pause to follow the firing of the gun on Signal Hill on 14th May 1918.The first minute is a time of thanksgiving for those who have survived and the second minute is to remember the fallen.

The Geology Of The Cape Peninsula