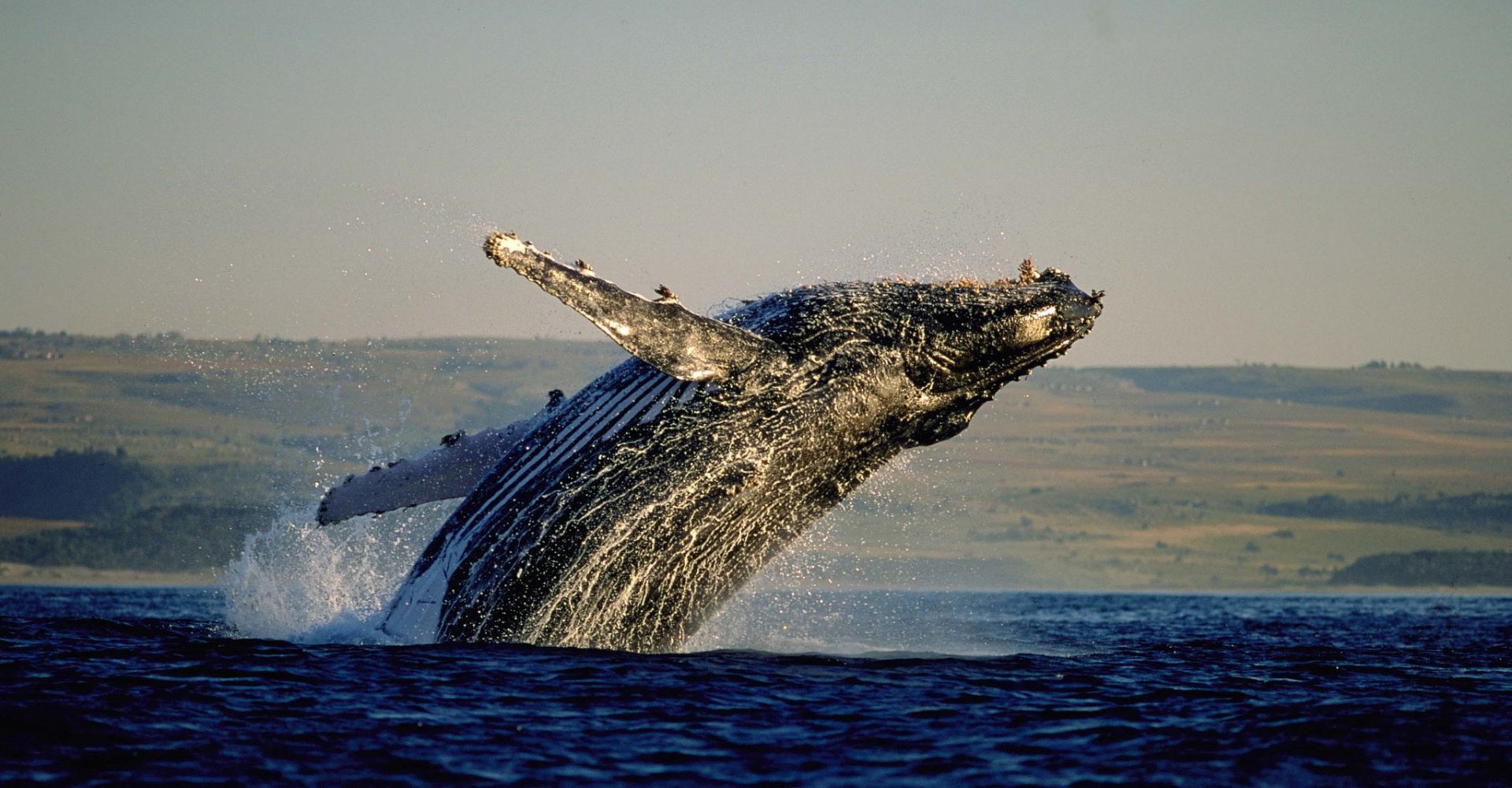 South Africa has to be one of the most incredible destinations worldwide for watching marine mammals. In early June, southern right whales leave their Antarctic feeding ground to frolic in the warm waters of the Cape coast.

Here they mate, calve and generally hang out, occasionally flopping a tail up, or sticking their heads out of the water to check out the humans. To see migratory southern right or humpback whales, visit between June and October, the best months being August to October

The coastal waters teem with gentle giants, from southern right whales and humpback whales, to Bryde’s whales and even the odd orca, although rare. They spend time mating, calving and rearing their young – and giving whale-watchers spectacular displays of water acrobatics. 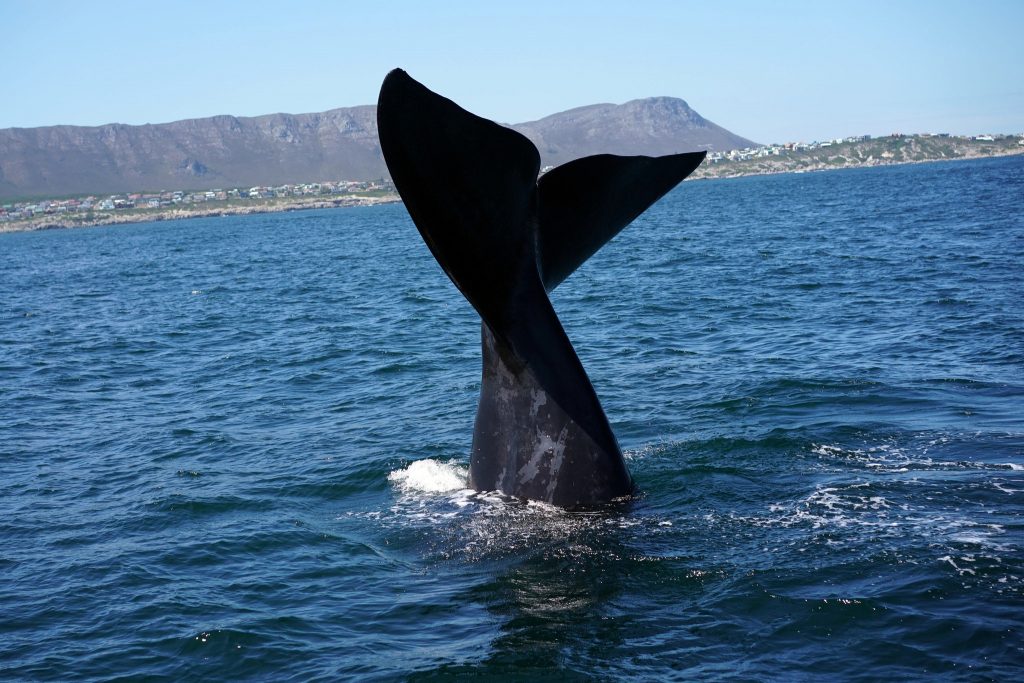 4 of the best places to watch whales in South Africa

In Cape Town, you can sometimes spot whales from along the road on the False Bay coast. Though less guaranteed, sightings around Cape Town are still plentiful. Get up high, such as from the scenic Boyes Drive above Kalk Bay and St James or the mountainside above Simon’s Town, to get a better view. Or pop in to a seaside café or restaurant anywhere on the False Bay side of the Cape Peninsula for front row seat.

The town of Hermanus is only a 1.5 hour’s drive from Cape Town and arguably offers arguably the best land-based whale watching in the world, making this seaside town the whale capital of South Africa. Spend some time gazing out to sea over Walker Bay and you’re sure to spot a whale or two. This is one of the whales’ most popular calving spots so you might even spot a calf too, with whales often coming within mere meters of the shore.

The cliff path at Hermanus is one of the town’s most beautiful features. It meanders for 11 km along the rugged coastline, between the New Harbour to the west, and Piet-se-Bos, just beyond Grotto Beach, to the east. It is on the Hermanus cliff path that some of the world’s best land-based whale watching occurs (from August/September). Set at regular intervals on rocks and cliffs that overlook the sea are a series of wooden benches for that very purpose The annual marine visitors are part of Hermanus’ identity, the town boasts the world’s only ‘whale crier’.

Just along the coast from Hermanus is the area known as the Overberg located in the Southern Cape. The area extends from Hermanus to Gansbaai and beyond to Cape Agulhas – the southernmost tip of Africa.

To ensure that the giant visitors who make their annual pilgrimage to this area are not disturbed during their nuptial activities, the area off the coast in Walker Bay has been declared a Whale Sanctuary Marine Protected Area, which means that no unauthorized boats of any kind are allowed within its boundaries during the peak months of July to November.

The 5 day Whale Trail hike from Potberg to Koppie Alleen in the De Hoop Nature Reserve covers 55 km of pristine coastline. Frequent whale sightings, thick and fragrant fynbos as well as wondrous rock formations make this one of the most beautiful hikes in South Africa. Make sure to book this hike with Cape Nature well in advance due to the high demand.

Nature lovers seeking true escape will find this at De Hoop Nature Reserve. The world-famous De Hoop dunes are known as an epic whale sighting spot. Relax in the unspoilt setting and watch in awe as these beautiful creatures calve, blow, breach, belly-flop, spyhop and tail-slap. Don’t forget your binoculars though because most of the action is a few metres out (and calves aren’t highly visible from shore). The De Hoop Reserve is a World Heritage Site and one of the world’s most important nurseries for the Southern Right Whale.

At Plettenberg Bay, whales visit during May and June and then again on their return migration, from November to January. Bottlenose and humpback dolphins are in residence all year round. A breeding colony of Cape fur seals completes Plettenberg Bays’ impressive array of marine mammals. Whale watching trips in boats, kayaks and aircraft are on offer in this seaside town and viewing distances and time spent with each animal is strictly monitored so that there is minimal interference

These huge beasts sometimes loll around mere meters from the shore, thus they are clearly visible for some spectacular shore and cliff based whale watching from points along Robberg and Keurboom beaches and Robberg Nature Reserve.

The dolphin and whale-watching industry is well organized, with boat trips, a dolphin-watching kayak operation and a number of aircraft from which you can have impressive aerial sightings. Plett Tourism promotes and support a responsible boat-based whale and dolphin-watching program. Operators are closely monitored to ensure that the recommended distances and time spent with each animal is being adhered to ensure minimal interference and impact on marine animals.For more information contact Plett Tourism on: 044-533 4065.