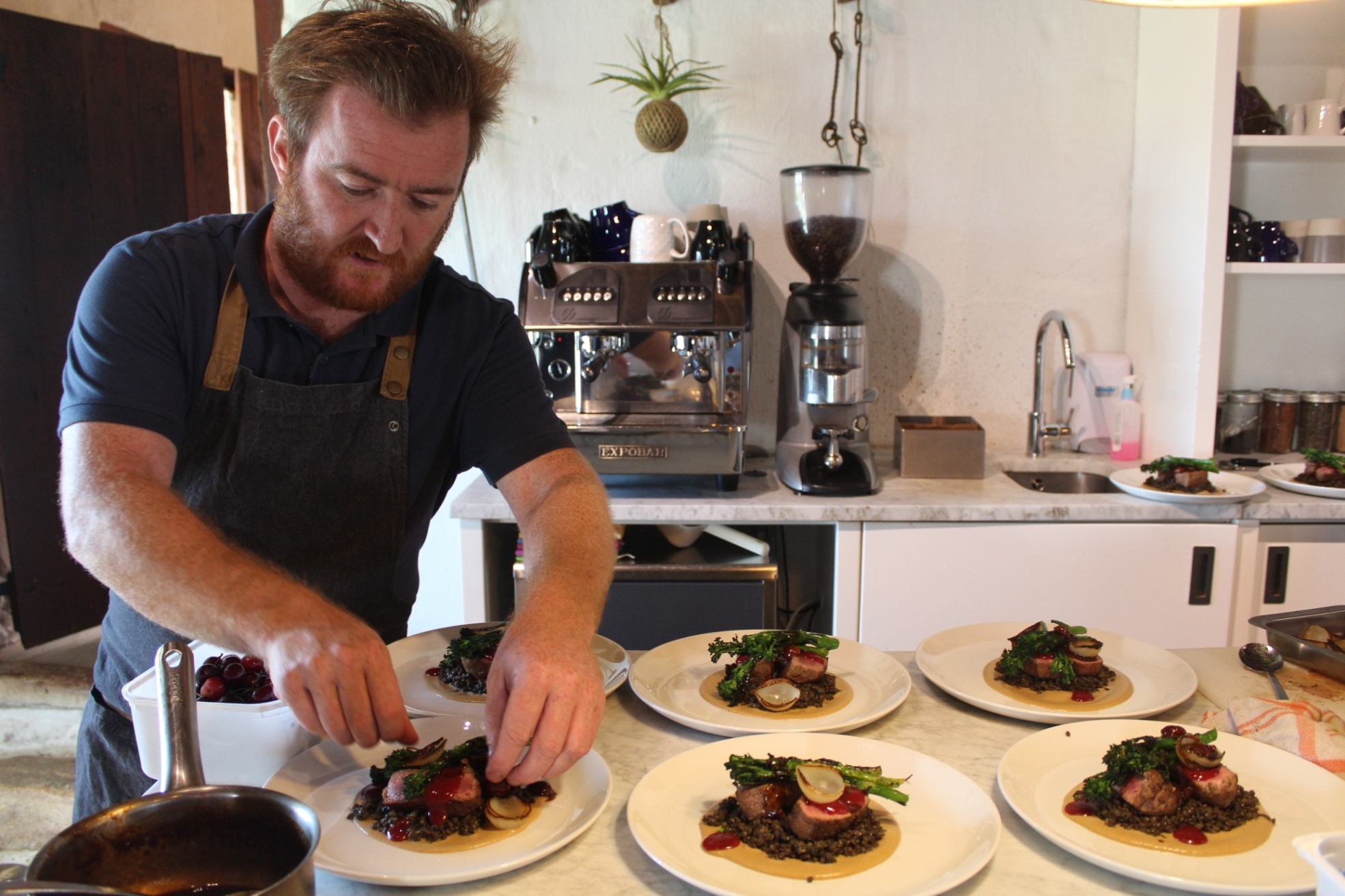 Wining and dining with Jack Stein in one of the South African Cape Winelands – The Durbanville Wine Route.

When your father is acclaimed British chef and restaurateur Rick Stein, food is sure to play a large part in family life.

It’s little wonder, then, that sons Jack and Charlie are following in his footsteps in Wine, Dine & Stein, a lifestyle series exploring the wine and food of Cape Town’s Durbanville Wine Valley.

Over the course of 13 episodes, viewers will be taken on a gourmet journey with Charlie chatting to the winemakers, tasting their wines and trying to come up with the best pairing for the food that older brother Jack is preparing with the chefs – both in and out of the kitchens.

The series starts on the  People°s Weather channel (DStv 180) on Sunday, April 19 at 18:00, and will air at the same time for the next 12 days with repeats thereafter for those who miss the episode premieres. 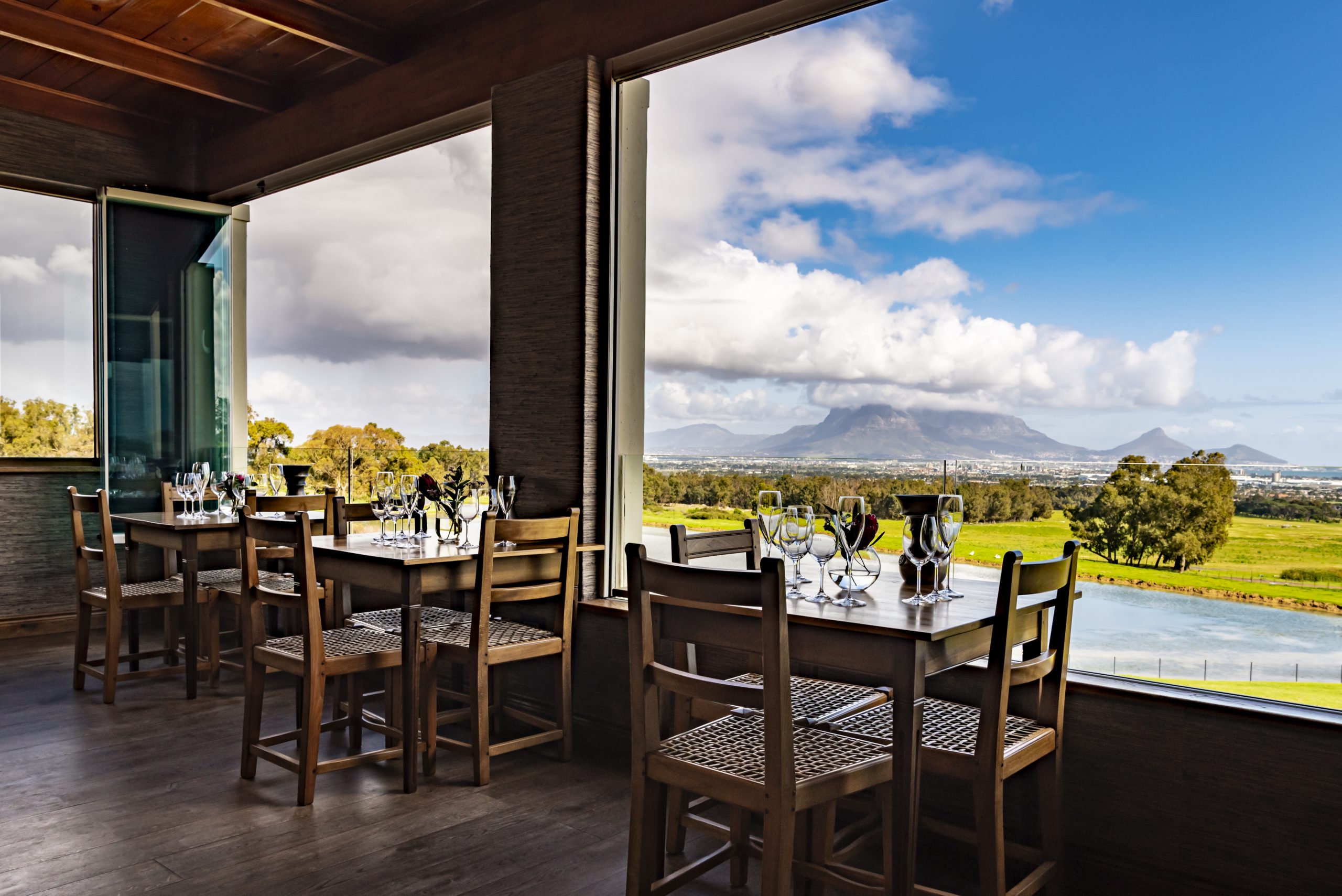 In advance of the start of the series, Jack Stein shared about his time in SA filming the series:

Tell us a bit about Wine, Dine & Stein – what can viewers look forward to?
It’s all set in and around 12 wine farms located in Cape Town’s Durbanville Valley and is based on our different fields of expertise. Charlie is the wine guy and I’m the chef. It’s around Charlie talking to the winemakers and finding interesting wines and me having food experiences with local chefs and food producers. Then there are some brotherly competitive elements thrown in including a wheelbarrow race, firing canons, wakeboarding in a quarry, paragliding and a cocktail making competition to name just a few!

What drew you to filming in South Africa?
Charlie has been going on about South African wine for a long time. It’s well priced and extremely good quality. I knew a little about the food scene there – especially around Cape Town – so I was keen to learn about new ingredients and traditions.

Were there any standout places that you visited?
There was, on top of a mountain — we were both not keen, but we ended up going down it in a rather extreme way! You’ll have to watch the show. Also, we visited Newlands to watch some cricket on our day off, which was great. We are both huge cricket fans.

It sounds like a tough gig! What were the high points?
The high points, for me, were seeing how different wine farms approach their food. In some, it was just simple burgers and pizzas; with others, we were foraging for waterlily flowers and braising them, which was amazing or learning how to make boerewors and roosterbrood.

You and Charlie seem to get on well. How did you cope spending so much time with your brother?
Yeah, really good. We lived together for the duration of the shoot. It was great seeing how professional he was with the camera crew; he’s a natural. We also had a great mate, Scott Wade, who used to be the head chef of the two-Michelin-starred restaurant Midsummer House in the UK, so on our days off we ate some amazing food in other areas of the Western Cape such as Stellenbosch and Franschhoek.

Your dad Rick is a stalwart of the foodie travelogue genre – what have you learnt from him?
Be nice to the crew, offer to help any way you can and always be on time. They do the hard work – all we do is say our lines.

Did you learn to cook at a young age? Were you always interested in food?
Yeah, I guess we were the prototypical foodie family, travelling and getting inspiration for the restaurant during our winter. We spent a lot of time in India, the Far East and Australia, so we were surrounded by food and produce the whole time. I love food and I love travelling and meeting people through food. I learnt that from my parents. But I didn’t eat in a Michelin restaurant with my dad until I was 28. We always ate food from street vendors, which surprises some people.

Can you give us some of your favourite food and wine pairings? 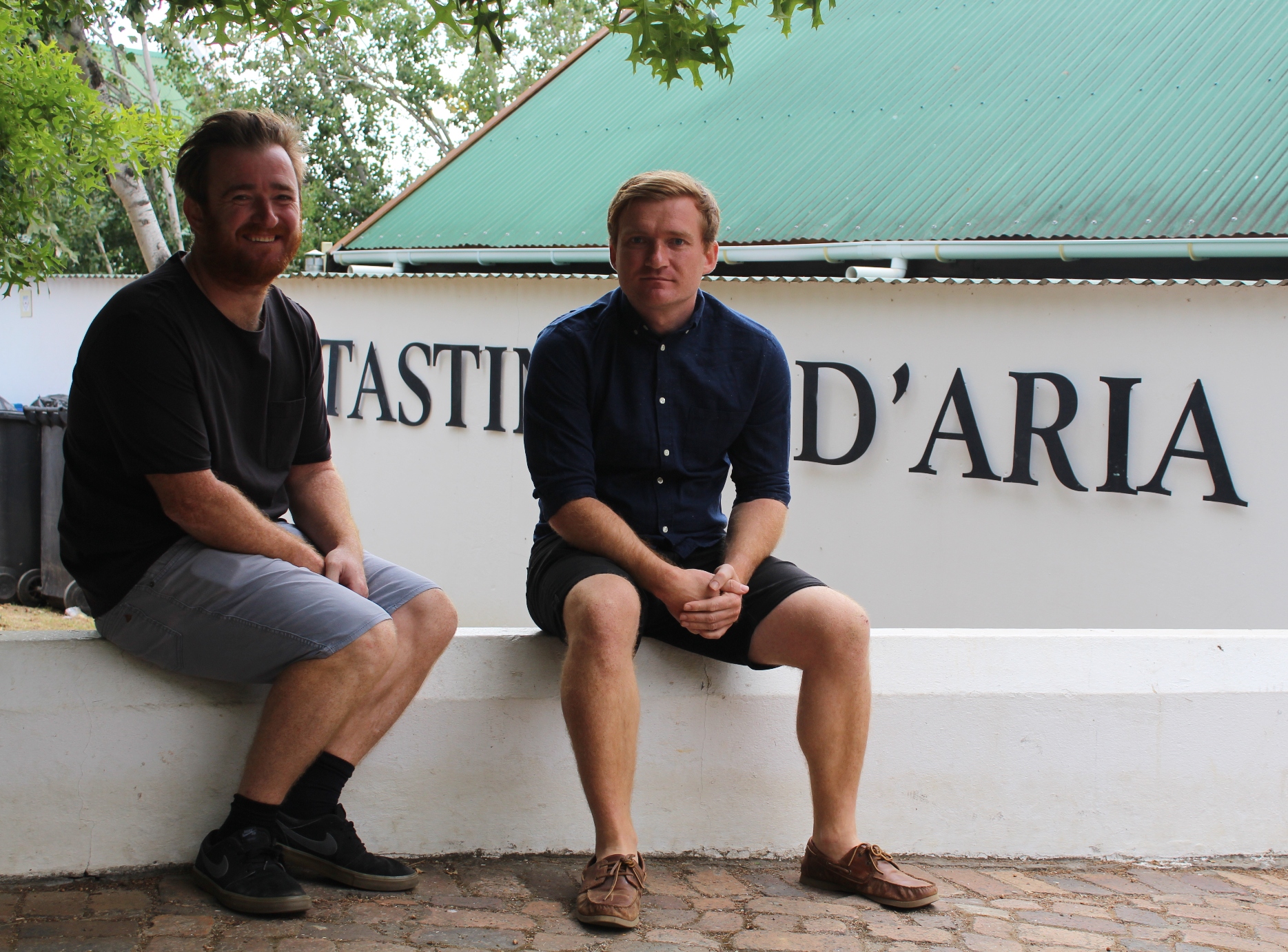 The brothers visit the acclaimed wine farm Nitida where they meet owner Bernhard Veller and award-winning winemaker Daniel Keulder. The boys get a crash course in bottling wine and how to fire a canon. Charlie gets time to savour the wines as he finds something to pair with the yellowtail Jack’s cooking in the kitchen.

Episode 2:  Altydgedacht (Monday, April 20 at 18:00)
The brothers visit the historic Altydgedacht, owned by the Parker family. Charlie gets to try their Italian Barbera and Jack gets to make South African carpaccio. A bit of zip-zooming and horse riding is also on the cards. Sounds like fun on the farm.

Episode 3: Signal Gun (Tuesday, April 21 at 18:00)
The boys go loose cannon as they visit Signal Gun and its amazing views. They also go on a private game drive, get to try the craft beer and fire a cannon. Charlie savours their signature wines while Jack cooks up a storm with a mussel pot.

Episode 4: Hillcrest (Wednesday April 22 at 18:00)
The Steins are travelling to the multi-faceted Hillcrest Estate. This place isn’t just famous for wine, but also its olive oil. After that it’s off to the craft beer brewery as Jack cooks burgers with the chef. There’s also time for a bit of wakeboarding. On a wine farm? Really? 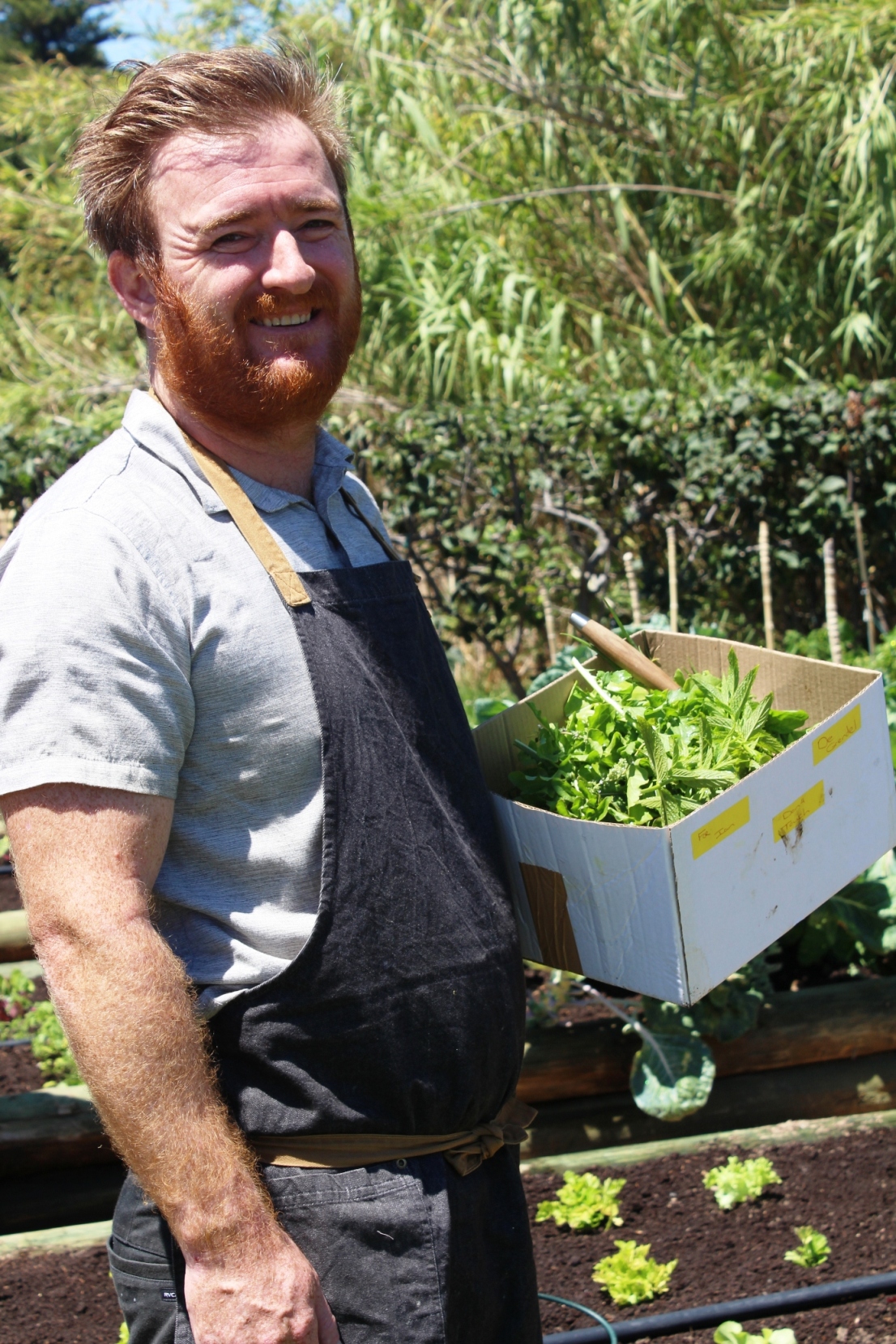 Episode 5: D’Aria (Thursday, April 23 at 18:00)
It’s all about the music connection as the Steins visit D’Aria. They go off-road as they mountain bike around the farm. Jack tries his hand at cooking up a quail dish, while Charlie gets to try some fantastic wines inspired by the arts and, as a bonus, there’s a little gin cocktail challenge waiting. May the best Stein win.

Episode 6: Meerendal (Friday, April 24 at 18:00)
The brothers are making a stop at the mesmerising Meerendal Estate. It’s over three hundred years old and there are some splendid wines to be tried. Not to mention a very classic South African dish to go with it. Then it’s the boys’ very first pizza and wine pairing before they end it all off by conquering their fear of heights. Geronimo!

Episode 7: De Grendel (Saturday, April 25 at 18:00)
The Steins are touching down at the very civilised and respected wine estate, De Grendel. They get a private tour as well as a chance to savour some truly special wines. As for the food … it’s lamb for days. This is going to be a royal adventure!

Episode 8: Groot Phesantekraal (Sunday, April 26 at 18:00)
The Steins get back in touch with their farming roots at the family run, Groot Phesantekraal. Labour and love is on the menu, plus a few fascinating wines as Jack gets to cook venison steaks in the farm kitchen. All while the Brink family find ways to get them working without getting stung!

Episode 9: Diemersdal (Monday, April 27 at 18:00)
The brothers touch down at Diemersdal Wine Estate. This farm is renowned for its award-winning Sauvignon Blanc. And not to mention a quintessential South African dish being made, that also involves a bit of muddy foraging. The boys take a look at dry land farming, as well as the estate’s historic architecture. So much to do and so little time

Episode 10: Canto (Tuesday, April 28 at 18:00)
The lads swing by the new kid on the block, Canto. They’ve got a couple of good ones lined up, plus a bit of MCC and macaron pairing. Jack gets down to some good old food truck cooking, as they also get active with early morning yoga and a game of cricket before lunch. Howzat!

Episode 11: Klein Roosboom (Wednesday, April 29 at 18:00)
The lads visit one of the gems of Durbanville, Klein Roosboom. These family owners are a close knit bunch with a passion for food, wine and good times. The Steins battle it out with the rival DeVilliers brothers in a wheelbarrow race, plus Jack gets to use their homemade smoker. This is going to be a good one.

Episode 12: Durbanville Hills (Thursday, April 30 at 18:00)
It’s time for the big daddy. The internationally renowned Durbanville Hills.
This is a massive operation and the brothers get to blend their own wine. Jack gets to make his own South African sausage, while Charlie pairs some of their best wines to go with it. Let’s get cracking.

Episode 13: Finale (Friday, May 1 at 18:00)
It’s time to say goodbye to the Durbanville Wine Valley and all its beauty. But the Steins are going out in style, as they’re inviting all the people they’ve met to one final send off. Before that, they’re heading to the beach for a swim, get a first-hand look at how to make rum and try their hand at Cool Runnings. These guys don’t like saying goodbye. 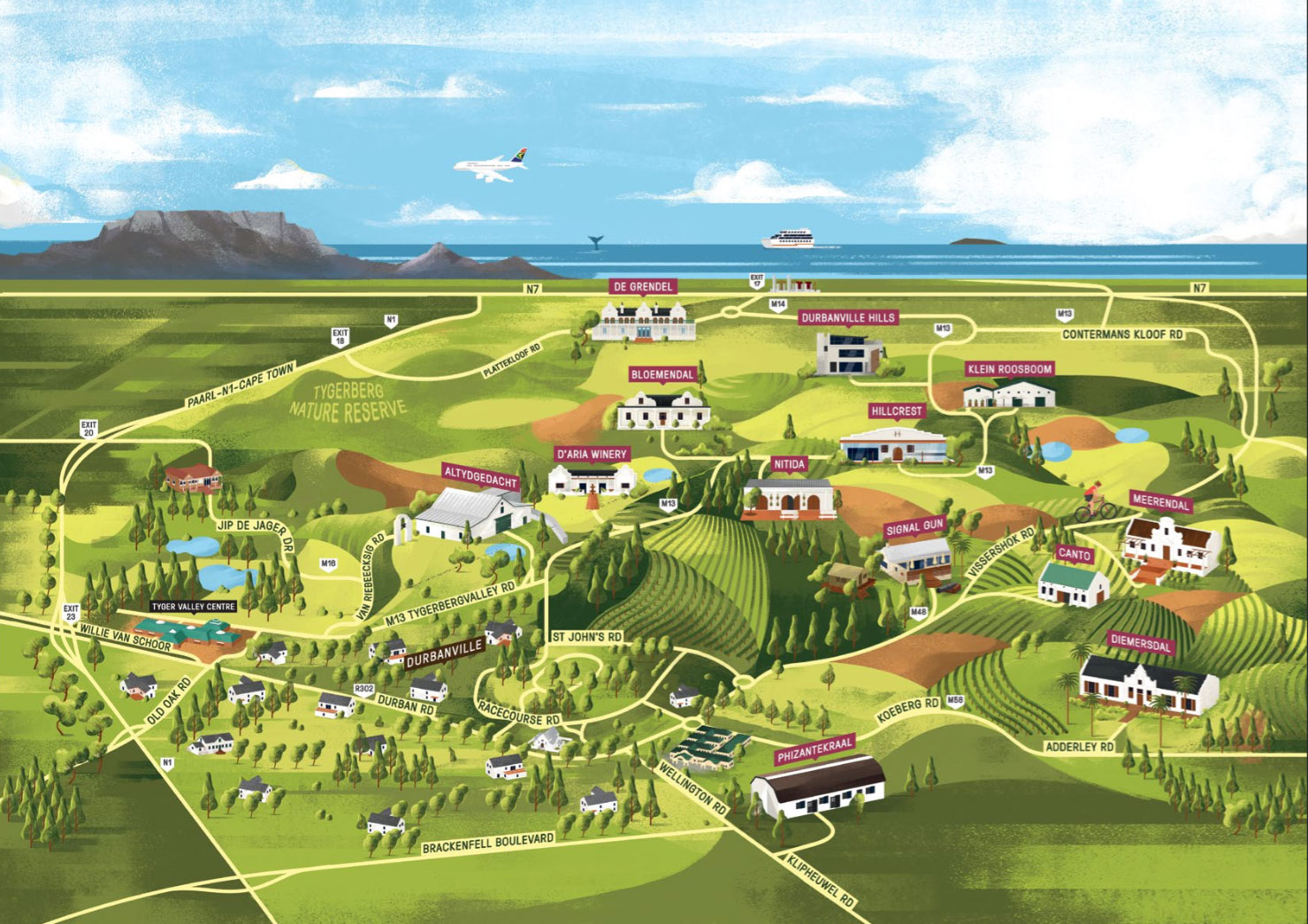 FARM DRIVES IN THE WINELANDS